Easily three times that amount of people from around the state were expected in St. George over the weekend for the two-day event, demonstrating that mountain biking is the fastest growing high school sport in the state and in America.

Jake Weber, course designer and a coach of the coaches for the Hurricane Flying Tigers mountain bike team, talked to St. George News on a walkabout around the Pit and the trails at Desert Canyons Friday morning.

“This is the longest mountain bike course for high school kids in the nation,” Weber said. “This one is 7.3 miles and you do two laps. It has 600 feet of climbing per lap, and it demands skills that these kids have built up over the course of the year.”

The mountain bike season has five races, including state. It starts in August and concludes at the state championship. Utah high schools compete in four regions, South, East, Central and North with two more regions scheduled for next year due to growth.

“We like to say we don’t have a bench,” Weber said. “Any kid can come do this. They get to be on the team with no tryouts – it doesn’t matter your ability level, you get to race.”

This weekend marked the second year in a row that the state championship was held at Desert Canyons, fostered by a unique partnership between the developer of the residential community and the cycling league.

“They’ve spent thousands of dollars in man hours and equipment clearing this out,” Weber said, explaining that the trails, on private land, are maintained and made available for the high school event at the developer’s expense.

Weber talked about the GRIT team – Girls Riding Together – and the Elevate Program, through which kids with special needs get to take part in a race.

“I love the growth and how we’re making mountain biking for everyone,” Weber said.

Region 10 schools all have their own clubs (mountain biking is not an officially sanctioned sport in the Utah High School Activities Association) after starting out as a composite team called the Flying Monkeys five or so years ago.

“We got too big to all be together, so we split into our separate schools and it keeps growing crazy ever since,” Sam Stoddard, the coach at Dixie High School said. Stoddard was part of the Flying Monkeys when it originally started.

Stoddard said that the Dixie club has 72 kids in it, and they’ve had a great season.

“We love to get kids on bicycles and provide them with a sport they can do for their whole lives,” Stoddard said. He added that the sport creates a special bond between athletes.

“The kids are super competitive on the course, and then they wait for each other at the finish line and congratulate each other and cheer each other on,” Stoddard said. “They love it and they love getting to know other kids from around the state.”

Coach Daniel Hall of the consolidated Iron County team said they have 70 riders on the team this year with 15 racing at the state championship. He agreed with Stoddard about the good vibe mountain biking creates in its athletes.

“It’s a great venue, a fun course. The stoke level in this area is really high, it’s a good place to mountain bike,” Hall said. “Our motto is ‘Ride bikes, be nice and stay Red.’ It’s all about spreading the stoke and getting kids on bikes.”

Snow Canyon coach Nate Hansen said the Warriors had a big group of 10 freshmen racers, and will have a handful of riders in the junior varsity and varsity races on Saturday. He said the secret to the sport’s growth is its appeal to everyone.

“You get the best of both worlds,” Hansen said. “It’s a team sport with an awesome team atmosphere, you cheer each other on from other teams.

“But when you’re racing, it’s you against you,” he added. “So it’s an individual sport and a team sport all at the same time. There’s something for everybody.”

Regardless of the talent level or the individual drive of each rider, Hansen pointed out that everyone has the same purpose.

“The overall goal is you love mountain biking for the rest of your life,” Hansen said, noting that most athletes don’t go on to be professional soccer or football players.

“But through your whole life you can always grab a mountain bike and go ride,” Hansen said. “If we can get kids to love that and be healthy, that’s what we want.”

Trisha Black was one of the many parents who lined the course along the singletrack, waiting to cheer on her son Nick Black, a freshman rider at Pine View.

“He loves the competition,” Black said about her son. “He loves the riding. He self-taught himself and then joined the team this year. It challenges him to be better, and he loves the mountain biking teams, they always cheer each other on.”

Black is a rider herself.

“I love this course, I’ve ridden it,” she said. “It’s a really fun course, super exciting.”

The first race of the event Friday morning was the freshman boys, and Hurricane’s Isaac Lebaron took a big lead on the first lap and held on to win the race in 58 minutes, 55.64 seconds. 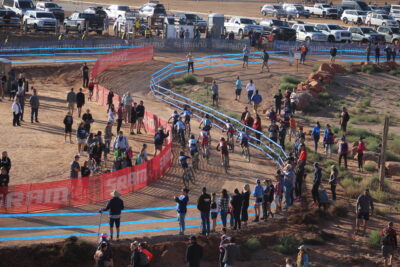 “I’m so surprised, I had no clue how fast everybody else was so I was just hoping to finish on the podium,” Lebaron said, adding that he could see second-place finisher Cole Horner of Brighton right behind him on the second lap.

“My first lap on the uphill I felt pretty tired, but on the second lap I had my second wind going,” Lebaron said. “I felt really good on that second climb.”

Lebaron knows he has set the bar high in winning the state race as a freshman, but he plans on competing for the next three years.

“I’m just going to train as hard as I can so I can stay ahead of these other guys,” Lebaron said. “They’re all really, really good so I’ve got to keep up.”